Categories: Administration , Architecture , How to , Logic , ODI , Tips and Tricks

For this particular Example I am exporting Project, Models and all the other objects under it from ODI_DEV [ DWR ] environment to ODI_WORK_EWR [ EWR ] 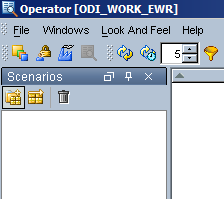 Right click and export the scenario to the required folder

Step 2 – Select the Folder to export the scenarios 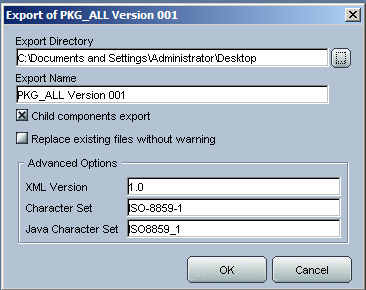 Step 3 – Repeat the above steps for all the scenarios to be exported.

Login into other EWR environment and go the Operator – scenarios tab ,as the EWR don’t have designer enabled.

Step 1 – Right click on the Scenario and select ‘ Import Scenario .. ‘ 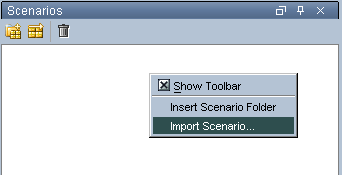 Step 2 – Select the right Import Type ” INSERT_UPDATE ” and the directory to be imported and you would find the list of scenarios to be imported. 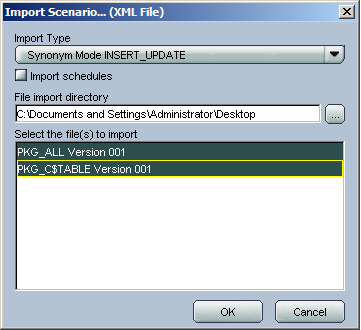 The best practice is to use import type ” INSERT_UPDATE ” for the reason being that if the scenarios are already present they would be updated else inserted.

And all the scenarios imported will be visible.

Run the test for one or two for successful scenario import and it works. 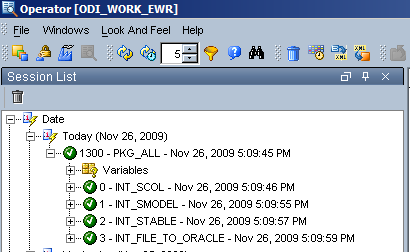 Its an excellent idea to organize all the scenarios in operator by Data mart or other categorize , this way it would be easy to import and organize.

The easiest and smartest way to organize multiple objects in ODI Package is to select them  and  right click to select the appropriate Alignment option.

Categories: How to , Logic , ODI , Tips and Tricks

To duplicate multiple objects at one time , select the required objects and  click on Duplicate objects button

left of the delete button

and  the duplicated objects are created as  copy of the objects.

When you have multiple Interface under a folder and you would like to go for a quick search , just expand the folder and start typing your search and  the match would be highlighted.

Please find a screenshot of the example ,as you can see i was searching for INT_SMODEL and the particular item is highlighted. 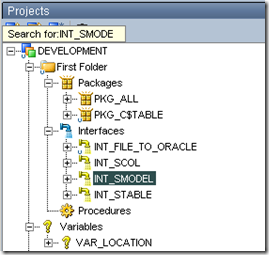 Here i was looking for  DB2/400 LKM and the particular KM is highlighted. 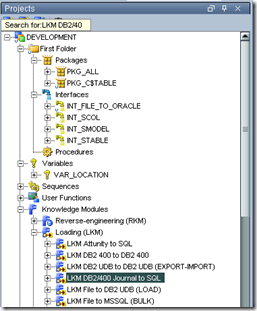 For this particular Example I am exporting Project, Models and all the other objects under it from ODI_DEV [ DWR ] environment to ODI_TEST [ DWR ] where DWR is Development Work Repository 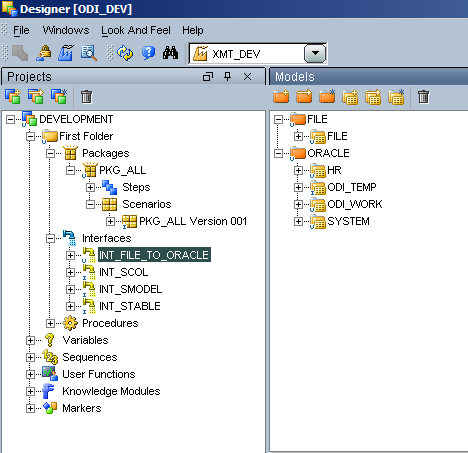 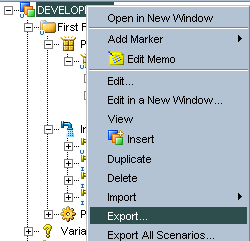 Specify the directory to be exported 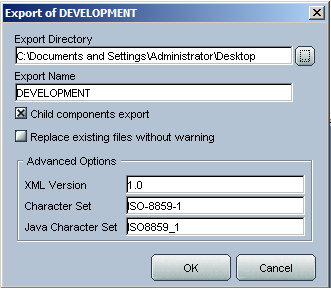 Step 2 – Export the models as shown above and you will find all the exported objects are created as XML Files as shown below.

Lets now move the objects to the other ODI_TEST [ DWR ] environment.

Login into ODI_TEST [DWR] , Right click on the Import Model folder option under the Model Tab.

Go the Folder where the objects are created. 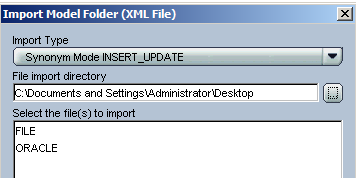 Use only ‘ INSERT_UPDATE’ option as this way it would maintain the internal ID of the objects. 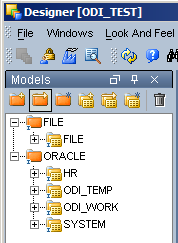 The models are imported . The next step is to import the project

Repeat the above step to import using the INSERT_UPDATE mode and select the project to be import and as you can see all the packages, interface , KM are also imported . 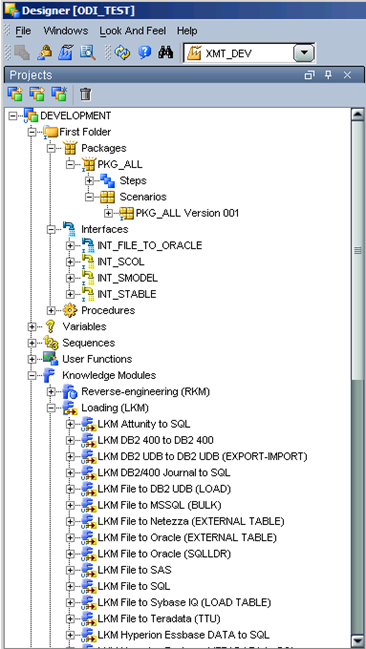 Now lets test the interface for its validity. 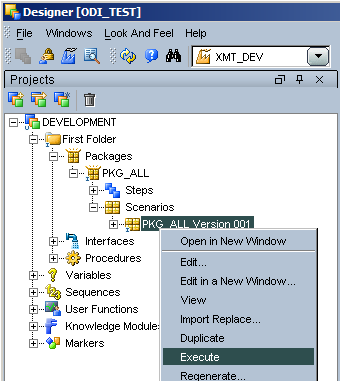 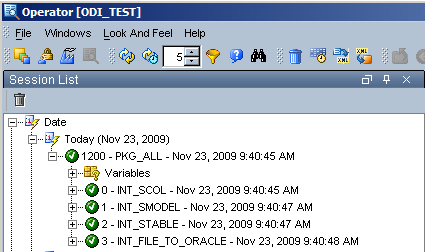 For this example I have not used any variable in that case I would suggest this order for Import.

Lets look at the Internal Id of both the environment, they are same , you can compare other objects too and you will find that their internal ID are the same. 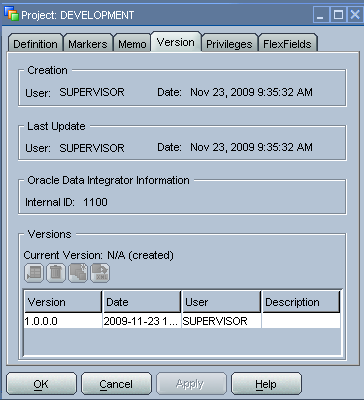 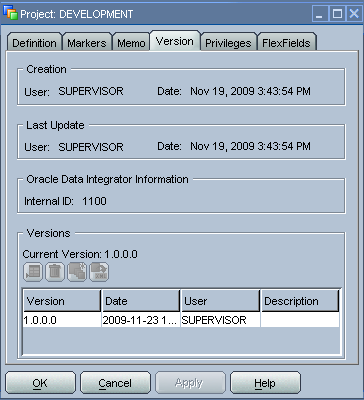 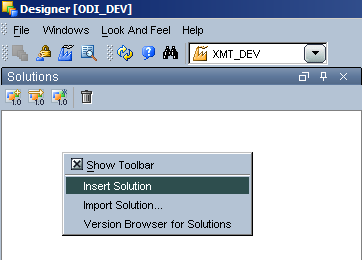 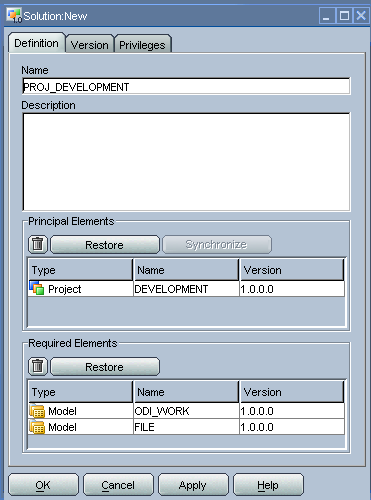 As You can see that , the Project and the Model are created with the required versions. 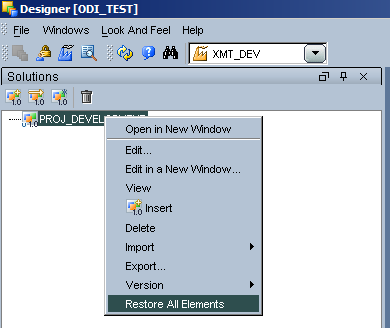 Right click on ” Restore All Elements ” to restore all the objects of the solution. 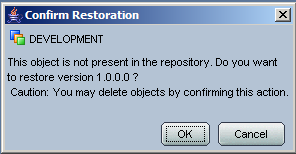 Do so for all the other objects and finally all the objects will be restored to the required version. 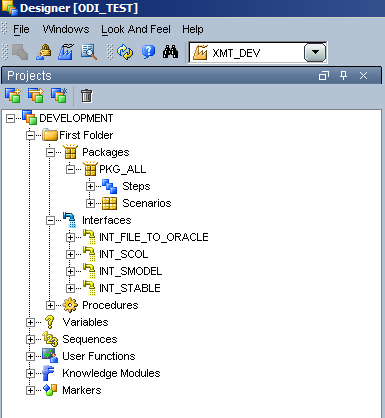 I ran the package again and it worked. 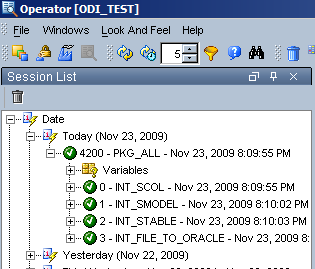 Please find my future post on more best practices and method of Export and Import of ODI Objects.

Categories: Architecture , How to , Logic , ODI , Tips and Tricks

There is some time that I don’t write a post, it’s because of the amount of work… too much clients, too much process… but all is perfect! I mean, work needs to exists because then it’s necessary people to do it! 😉

OK, today we are going to talk about those two tab’s at procedure step:

Obs.: When I say “Procedure Step” I mean “Procedure or KM Step” once this objects are almost the same but this is subject for another post.

Because of the interfaces, that has source and target tables, a obvious association is done and that is right. The difference is:

Before go to examples, a last information:

The most interesting and powerful characteristic of these tab’s is the ability of:

After theory and definitions, examples!

Every single record returned from this query into Source Tab (as it is a LKM, the metadata commands will create the right command)
Will be inserted in C$ table by the following command into Target Tab:

But this a example from a KM, could we try something in a Procedure?
Situation:

Before tell you how to implement, let me discuss about a very important issue: How are the returned values “delivered” to Target Tab???

A new point that, maybe, you aren’t aware about is:

Note that we will send a query from Postrgre SQL to Oracle it means, two distinct RDBMS.

Agent is able to transform the data format

For Oracle people, this explain how ODI can integrate several Oracle databases with no DBLink.

As I mentioned above, ODI will generate the code and send it to the Oracle database, but how to indicate, in the generated code, where use a column from source?

It’s easy. The query I proposed is:

The code for target tab will be:

By using the column name prefixed with “:”, ODI understand that is to generate the Oracle code with the equivalent column from Postre query.

If a function was used in the souce like:

Just add an Alias and use it at target tab:

Well, that is all friends!

The code at Target tab will be executed some many times as the amount of records returned from the Postgre query.

Just remember to setup the respective technology and Logical schema at each tab.

I was helping in a thread at ODI Forum, from Oracle page (http://forums.oracle.com/forums/forum.jspa?forumID=374) and I decided to describe the situation here once several people ask me similar questions

What is a Subscriber and how to use it?

I will try to demonstrate it by an example:

As you see, these are very distinct process. To solve it using subscribers we could do:

Ok, now we have the environment ready to both process, load to DW and send the email

If you take a look into the journal table (J$_) after insert a new record at Client, you will see 2 records at the view, one to each subscriber and that allows you to execute distinct process to the same source DML.

In this example, to send the email an interface is used to put the new client in a table (another system is responsible to send it) then all that is necessary to be done is:

And,   to the DW load process:

That is all! If you query the J$_ table near to 11:00 pm you will see all clients that were inserted  during the day with the subscriber “sb_DW” and only the clients inserted after 10:59 pm.

if the situation doesn’t need to send the same data to more than one target, just one subscriber can be used to infinite tables.

Well guys, I hope to have reached the objective the explain how a subscriber can be used!!

Categories: Administration , Architecture , How to , ODI , Tips and Tricks

Before jumping into this detail of the topic I would like to make the definition of schema and Work schema with respect to ODI Topology clear and i.e

SCHEMA – Schema where ODI inserts and updates the target tables.

WORK_SCHEMA – Schema where all the ODI Temporary table ( C$_,I$_ etc ) are created and dropped by ODI.

Work Schema is an important part of the ODI Architecture. As you all know ODI create Temporary tables, for its loading, integration and transformation from the various source to the target, such as C$_, I$_ etc.  These temporary tables can create a lot of junks and ugliness in your target table in the long end.

The best solution is creation of separate Database schema or user called “WORK_SCHEMA”  or ” TEMP ” or “ODI_TEMP”  whatever you wish name as per your environment , but the most important part is how you use it .

I very strongly recommend the usage of using this TEMP  as ‘ Schema (work schema ) ‘ option in Physical schema for all the technologies. The result and the impact of this is whenever ODI create temporary tables ( C$_, I$_ etc ), you can drop or clean the space of this schema as any time, thus avoiding clutter or temporary ODI tables in the target schema.

Option 1 – Having the Schema and the Work Schema in Topology same. 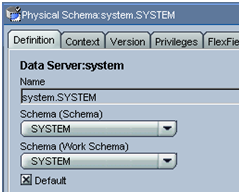 In such a scenario, ODI will create Temp tables (C$_, I$_ ) in the same schema , the result as you can see lots of junk . Would you love to have such scenario in your Production box?

Option 2 – Having the Schema and the Work Schema in Topology different. 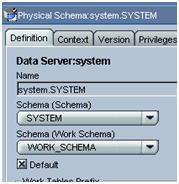 In such a scenario, ODI will create Temp tables (C$_, I$_) in the different schema, the result as you can see no junks and DBA can drop this WORK_SCHEMA ODI tables at regular interval.

I know what you all are thinking, isn’t ODI drops all the temporary tables, well the answer is yes but how many times you have created interfaces that you would create just for

or failed interface still not going till Drop table option

or some time due to some error it fails to drop the table ,

The result presence of these tables permanently in Database unless dropped manually.

I have seen companies using such schema with the option “Staging are different from the target” which is not a good practice of using such schema, as you generally developer would forget to use this option. Moreover, its best and easy to implement in topology rather than to use at 100s of interface created and still the Knowledge Modules creates the Temporary schema in the work schema before doing the Insert and Update.

This option can be considered an important aspect in ODI Best Practices.

Categories: How to , Logic , ODI , Tips and Tricks

I frequently got emails asking how to do show Business messages on OD and, as there isn’t such feature until version 10.1.3.5, I created a way to have it.

Now the preparation to the magic!

1) Create an Option in the Procedure, we can call it The_Message (Type Value), like: 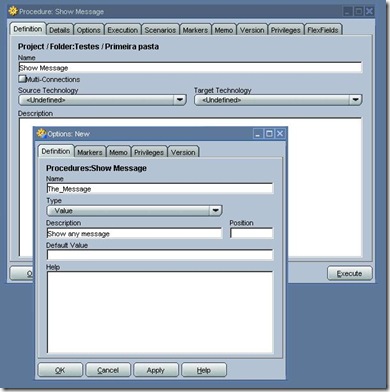 2) Now create a step, we can call it “Show Message”
3) Put the technology to Java BeanShell 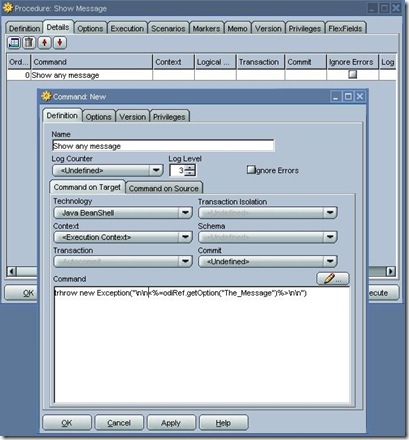 That is it! Nothing more!

To use it, add to any package, click on it, go to its proprieties, Option Tab and write however it the message you wish to show at Operator. It will be like: 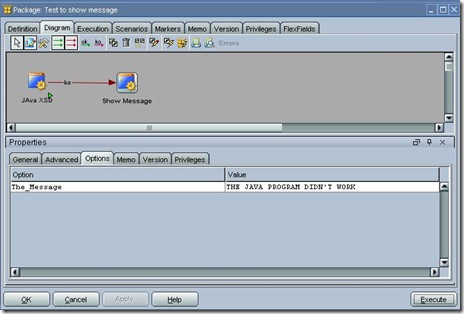 Now, if you go to operator, that is what you will get; 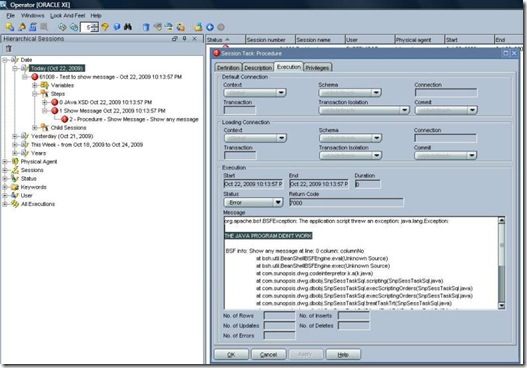 OK, now just a small tip! As you see, the “Show any message” step is in RED, that means “The process will be stopped here”. If you wish let it as “Warning” and do not stop the process, click on the checkbox “Ignore Error” in the Procedure step and you can add more steps after the Procedure “Show Message”.

Remember that you can use this Procedure infinite times in the same package or any other… Just change the value of the Option.

That is very useful to debug variable and gots its value at Operator!

Once more, comments are very welcome!!!!!!